The Entrance for Rotongaio Lodge 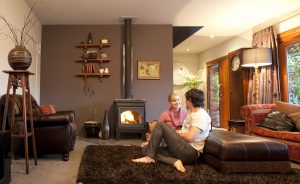 Situated 420 meters above sea level and 40kms directly inland from the coast Rotongaio Station (pronounced roto-ni-eo) connects its guests with nature. Here one can’t help but feel free and relaxed while in our piece of New Zealand paradise.

The surrouding area sees two pure spring-fed streams running into a naturally formed fresh water lake (Lake Rotoroa) that sits at the doorstep of both the lodge and cottage. Lake Rotoroa houses rainbow trout which are often caught by fly off at the main inlet stream by casting from one of the jetties or trolling by boat.

Rotongaio Lodge is located on our working cattle and sheep farm which spans across 2700 acres of hill country, flat stock grazing paddocks and valleys of native bush.

On the northern boundary flows the Waiau river which origins extend from the Kaingaroa forest in the Urewera Ranges and flows out to the Pacific Ocean near Wairoa. The Waiau River is the home for many brown and rainbow trout and creates a perfect secluded setting for keen fly fishermen. 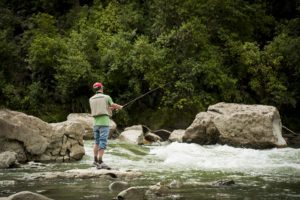 The bird life in the area is abundant and houses many of New Zealand’s most precious and native species including Kingfisher, Tui, Chatham Island Pigeon, Bell Bird, Fantail and many others that duck and dive around the property.

At Rotongaio we are able to live off of the land as it provides many types of fresh produce including fish, meats, fruits, vegetables, honey and eggs with water sources captured by the fresh water lake, natural springs and rainfall. 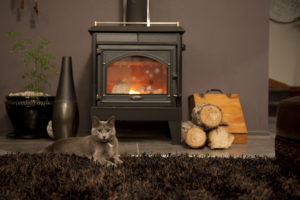 Squeaks, the house guard-cat, is basically a dog in a cat’s body as she hangs out with the locals most days soon becoming everyone’s best friend. She was rescued from the wild at only a few weeks old after being abandoned. Squeaks didn’t properly develop her vocals so was left with only a polite squeak, hence the name! Now aged eight she is queen of the manor!

The Lodge itself was the station house built in the early 1970’s to replace the original old homestead. In 2009 it was totally gutted, redesigned and re-built on the original foundations. The Lodge now has an upper-story apartment and the ground floor opens out onto a beautiful terraced area overlooking the lake from a 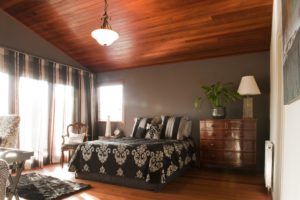 wonderfully well-appointed dining / lounge area. It also has a cosy library / office and a fully equipped chef’s kitchen with a coal range that supplies heating to each room. There are four downstairs bedrooms with adjoining bathrooms, each modelled to the highest standard and all with a lovely, comfortable, warm feeling. Each room has its own television and wifi access. The Lodge is surrounded by plantings of mature trees both native and exotic and has lovely flowing gardens with private areas for sitting and reading or just relaxing with views over the lake.

The property neighbours the community primary school, Pūtere School, which first opened in 1925 but closed in 1936. It reopened again in March 1960. In the 1970s as a result of land settlement the school was bursting at the seams. Today just 7 children attend the school but because of the remoteness of the district its future looks to be secure.

Pūtere district is an historic part of the North Island and witnessed events in the life of the warrior and prophetic leader Te Kooti. He sought refuge in the area between November 1871 and January 1872. The mountain Ngātapa and nearby ‘Te Kooti’s lookout’, at the junction of the Mōhaka and Te Hoe rivers, are both associated with him. The last engagement of the wars took place in April 1872 on the Mangaone stream at Pūtere, not far from where it joins the Waiau River just North of Rotongaio Station.